This week in history: The Sistine Chapel 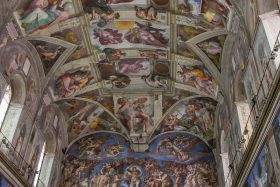 This week in 1512, the Vatican revealed the newly-painted ceiling of the Sistine Chapel, for the first time. Renaissance master Michelangelo had begun the work in 1508, under commission from Pope Julius II (often called the warrior pope). The master had actually resisted the project at first. The scale of the job intimidated him (with good reason).