This week in history: Thespis 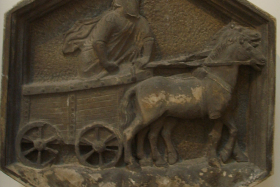 This week in 534 BCE, Thespis of Icaria became the first person we know of to portray a character on stage in ancient Greece. He sang about myths to an audience in Athens. But rather than just narrating by song, he played the various characters in the story, using masks to differentiate them. Thespis also