This week in history: Kublai Khan 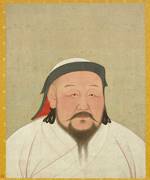 This week in 1260, Kublai Khan became ruler of the Mongol Empire. Grandson to the well-known Genghis Khan, Kublai was the empire’s fifth Khagan, or Great Khan. Kublai succeeded to the throne after the death of his eldest brother, Mongke. The latter died in 1259 without naming a successor, and almost immediately Kublai’s younger brother,