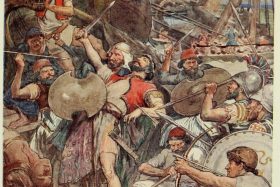 During the early 400’s BC, an alliance of plucky little Greek city-states beat back an invading superpower. Athens, Sparta, and their allies defeated the Persian Empire twice, in fact. Westerners often see the Persians’ defeat as a victory for freedom. The Movie “300,” for instance, casts the Greeks as freedom-fighters who saved Europe from an Asiatic