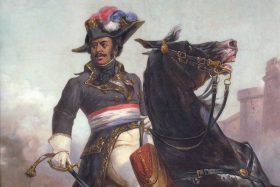 Revolutionary France had a black general. His name was Thomas-Alexandre Dumas. He was born in Haiti, the son of a French nobleman and an African woman enslaved on his plantation. Haiti was a French colony then, and young Dumas was a slave under French law. In fact, his father actually sold the boy when he was